The CD is available fromhttps://chrishodgkins.bandcamp.com/ or from this site

Here is a short clip of Jazz at the Quebec Hotel Cardiff with Victor Parker on guitar, Bob Tunnicliffe on trombone and Duncan Whyte on trumpet. From a tribute to Victor Parker on BBC Radio Wales 5th November 1980 Vic played with amongst others Dennis Walton’s Cubanaires and the Geraldo Orchestra.

Vic Parker, Duncan Whyte and Bob Tunnicliffe at the Quebec Hotel Cardiff playing If I Had You

This clip is taken from a tribute to Victor Parker on BBC Radio Wales on the 5th November 1980. The photo on  YouTube is from the South Wales Echo and was taken in the Quebec Hotel in Crichton Street, Cardiff shortly before it closed. 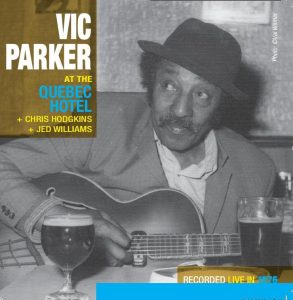 For a number of years, I had the great fortune to play with Vic Parker at the Quebec Hotel, Crichton Street, Cardiff.
I used to work with him in the Quebec every Monday and Wednesday. We had a little duo, just playing standards, and he would sing in a Cardiff accent. When you’re young, you forget so much; you can be handed the keys to the kingdom and not notice. Working with Vic was like that: he was in his late 60s then and was one of the nicest guys you could meet.

These tracks were recorded in the Quebec in January and February of 1976 with myself, Vic Parker and Jed Williams.
Chris Hodgkins
April 2022

The guitarist Vic Parker is a Cardiff legend deserving of wider recognition. A poster-boy for Butetown history and a hero to those who still remember his name, he was a versatile musician who loved to play and knew every tune in the book. The reluctance of outsider arbiters to class him as a ‘jazz’ musician, and a self-effacing lifestyle, away from the Metropolitan swirl, have conspired to keep him hidden from history.
There were black Welshmen who became known in London through playing jazz, but unlike the guitar-playing brothers Frank and Joe Deniz, and their younger brother Laurie, a member of the famous Ray Ellington Quartet, Parker kept a low profile, returned to Wales, and left it to others to sing his praises.

Born Henry Victor Parker Saunders in Cardiff on 5 November 1910 to a mother from Barbados, he was raised by his aunt and went to school in Cathays with Frank Deniz. At the age of 16 he signed up as a galley-boy but after two voyages, decided the sea was not for him. Within months he was in London with his guitar and busking on the streets.

‘Narker’, as he was known to his contemporaries, came out of a Cardiff stringed-instruments tradition that spawned the Deniz brothers and others such as Johnny Erskine, Arthur George, and the Trinidadian Arthur ‘Brylo’ Ford who played flute and quatro before switching to double-bass. At local hops and Christmas street celebrations they played traditional songs, shanties and dance-tunes and calypsos and other pieces learnt directly from Caribbean and West African sailors, with the cafes of Butetown as their schoolroom.

Around 1927, Parker and his friend George Glossop, another unsung hero, joined the musical production Alorna of the South Seas, and went on the road. They performed in London and elsewhere to considerable acclaim, playing Hawaiian music and when the show closed, worked wherever they could find an audience.

Parker returned to Wales but by the start of the second world war, he was back in London. He rejoined Glossop, who had stayed, to play at bottle-parties and dodgy dives. While Glossop went to sea to die in a prisoner-of-war camp in Germany, Parker was rejected for military service. He joined the Latin-American band of black Mancunian trumpeter Deniz Walton for a sophisticated Mayfair residency where shinyCuban-style shirts were the order of the day. A similar nightclub engagement followed with pianist Francisco Condé, until accordionist Tony Chadgiclakis, a Cardiffian of Cretan descent, arrived in London, and rekindled Parker’s enthusiasm for jamming.

John Scantlebury has credited Parker and Chadgidakis with bringing jazz to Cardiff in the late 1930s but this date is by no means certain. Their wartime association suggests it was more likely to have taken place in the late 1940s when Parker returned to Cardiff and the two set up in a succession of Butetown hostelries, forming a pub tradition that continued until Parker’s death on 9 February 1978.

Recorded evidence of Vic Parker’s exceptionality has been absent until now. He is believed to have recorded with a couple of
Latin-American bands in London immediately following the war, but it has been impossible to find evidence of this. Had he returned to
London in the 1960s when the jazz scene was going through a period of optimism and stylistic fluidity, this omission might have been rectified. Instead, he remained in Cardiff to make occasional appearances on film and television,
and to enchant all-comers with his playing.

A note to discographers: Victor Parker played several other instruments including accordion but he should not be confused
with another musician of the same name who recorded dance-music on that instrument with Victor Sylvester and others.