Chris was grateful for the lottery funding from the Arts Council  England for this tour. The music comprised a mixture of standards and four originals specially written for this tour that celebrates musicians band members have known with a story to tell. Chris is also grateful to Noson Allen/Night Out , Pizza Express Live and Splash Point Jazz Club. Further details from chris.hodgkins3@googlemail.com An outstanding Anglo/American quartet led by award winning trumpet player Chris Hodgkins with 29 year old South Korean pianist from New York, Jinjoo Yoo, “one of the most exciting pianists on the scene in New York”. Wayne Wilkinson a headline guitarist, “one of the best, most underrated jazz guitarists in the USA”, and Alison Rayner on bass, winner of the Parliamentary Jazz Award 2018 for Best Ensemble.

“This live chamber jazz album exhibits a wonderful chemistry between the trio of trumpeter Chris Hodgkins and guitarist Wayne Wilkinson. Captivating.” The Musician. On the 11th November Lenore Raphael + Wayne Wilkinson + Chris Hodgkins with Alison Rayner as special guest, launched their album “Lenore Raphael + Wayne Wilkinson + Chris Hodgkins at the PizzaExpress” at the PizzaExpress during the EFG London Jazz Festival. You can hear a couple of tracks from the album by clicking on the titles below: September In The Rain

Talk Of The Town

Georgia On My Mind   (Lenore feature)

Alone Together  (Lenore and Wayne  feature) 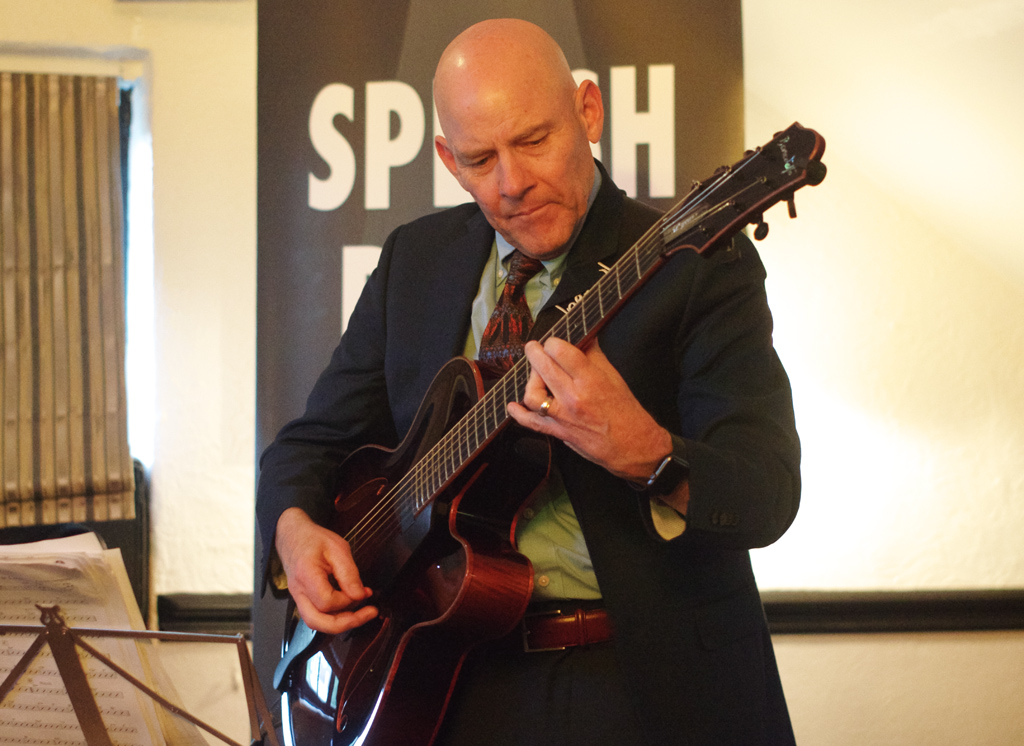 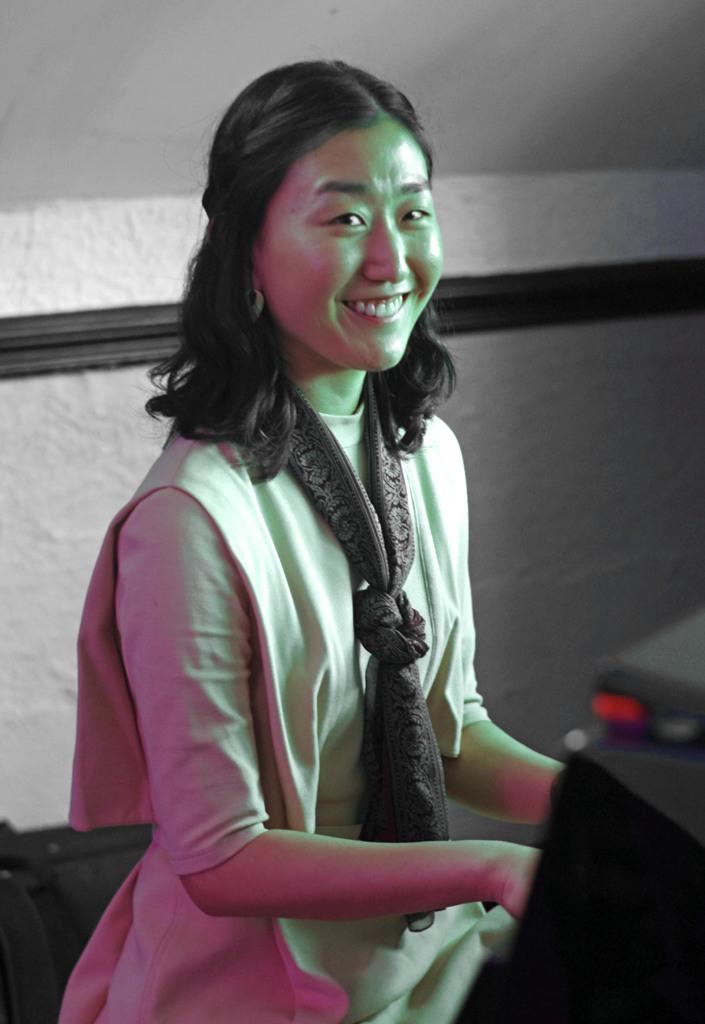 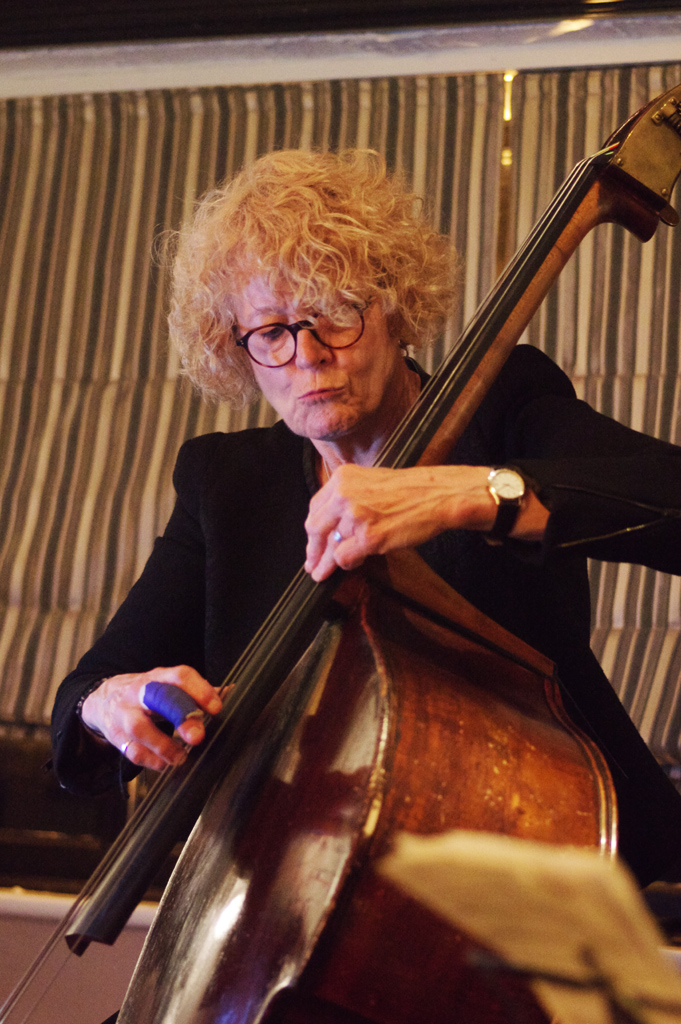 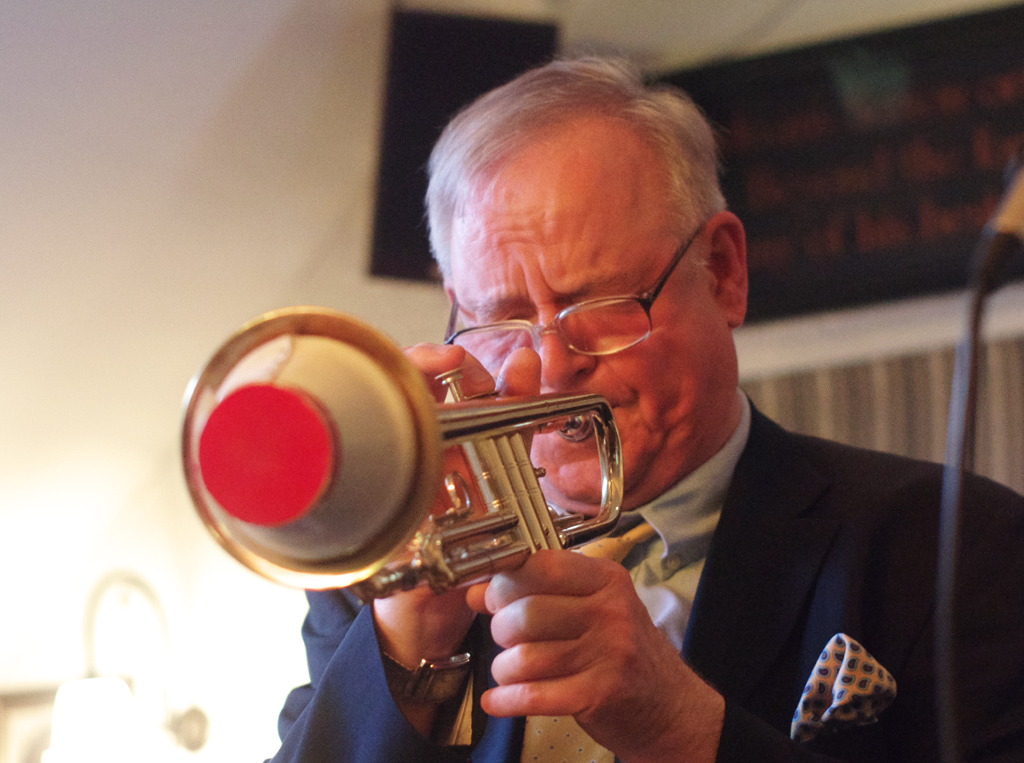 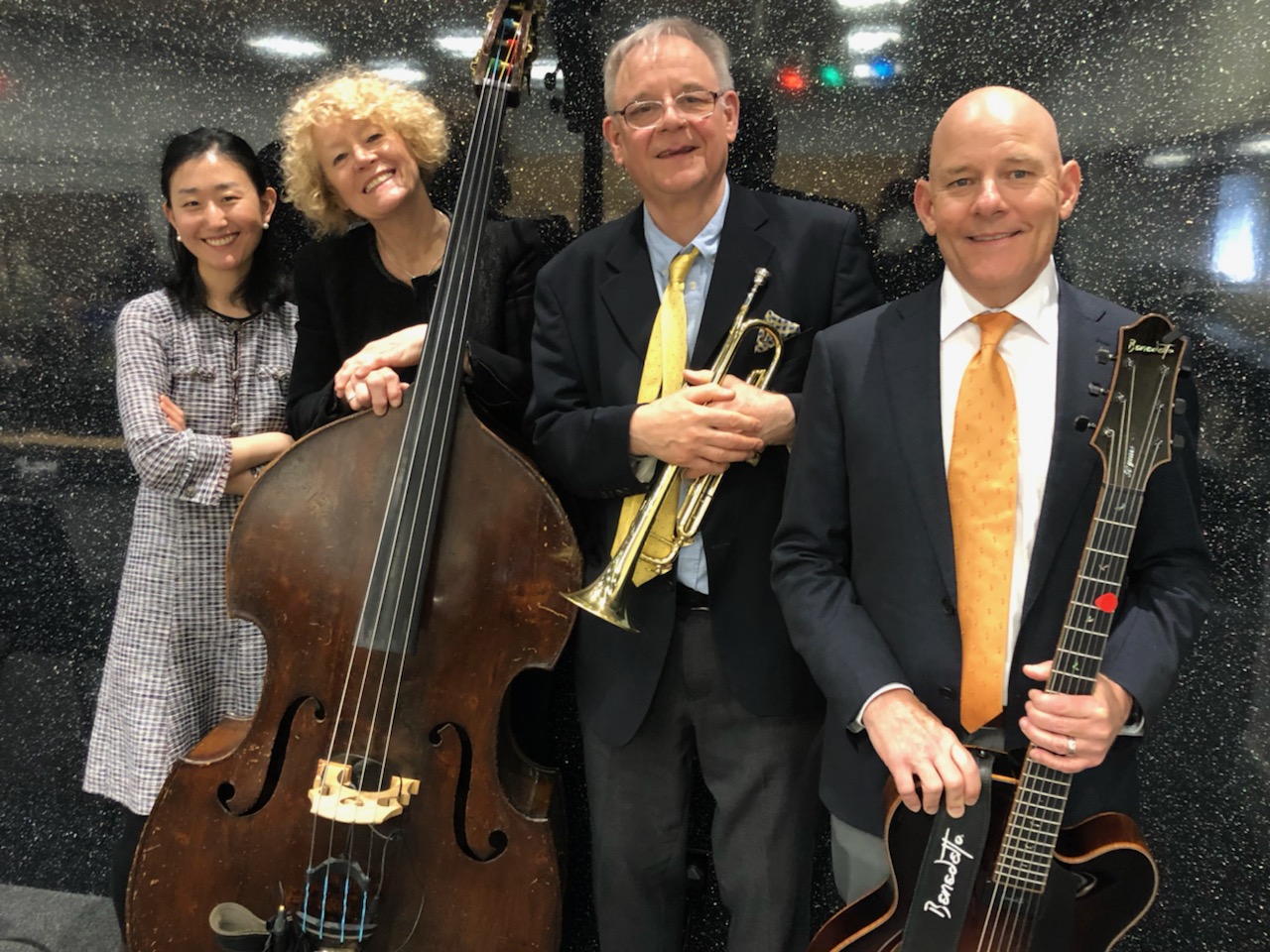 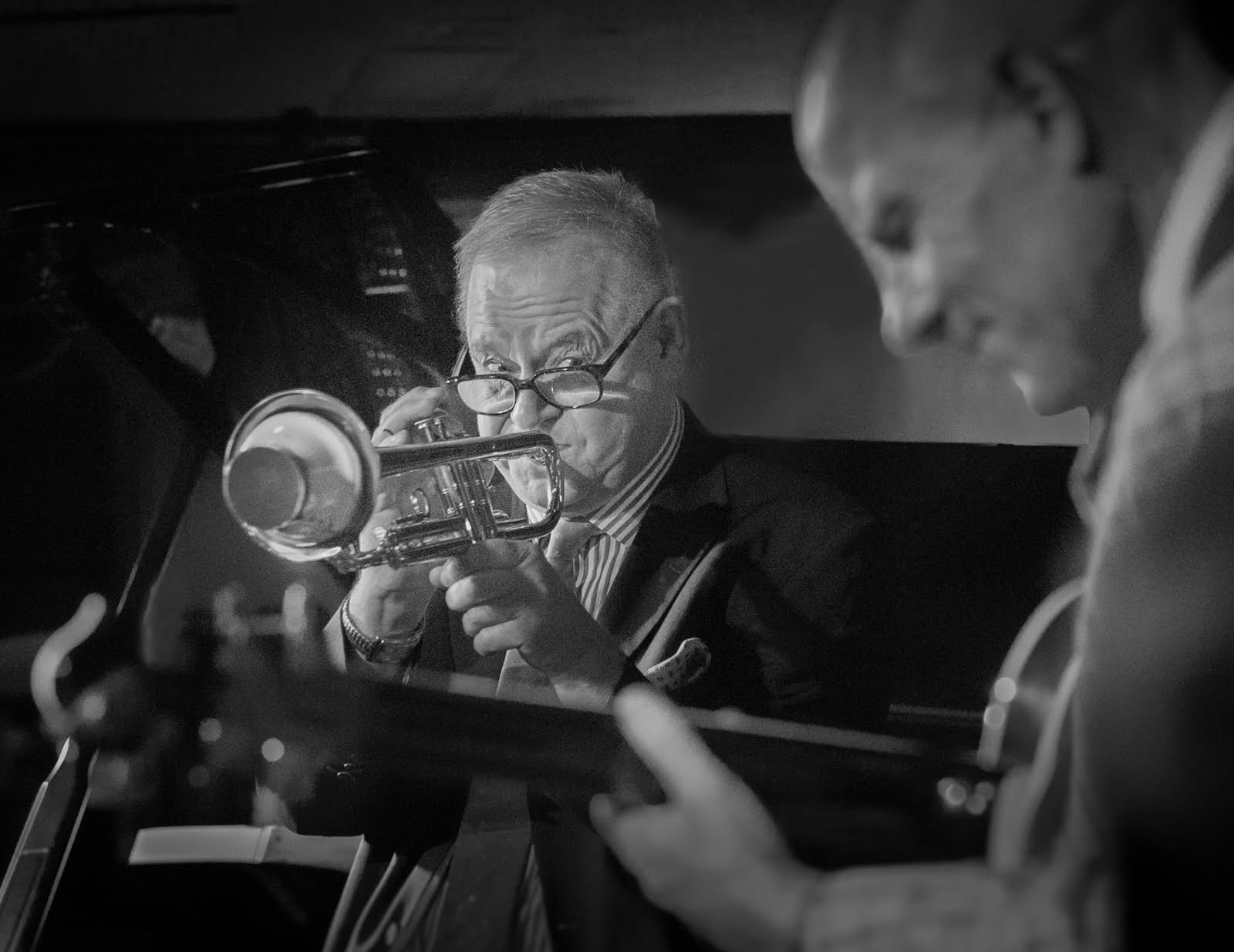 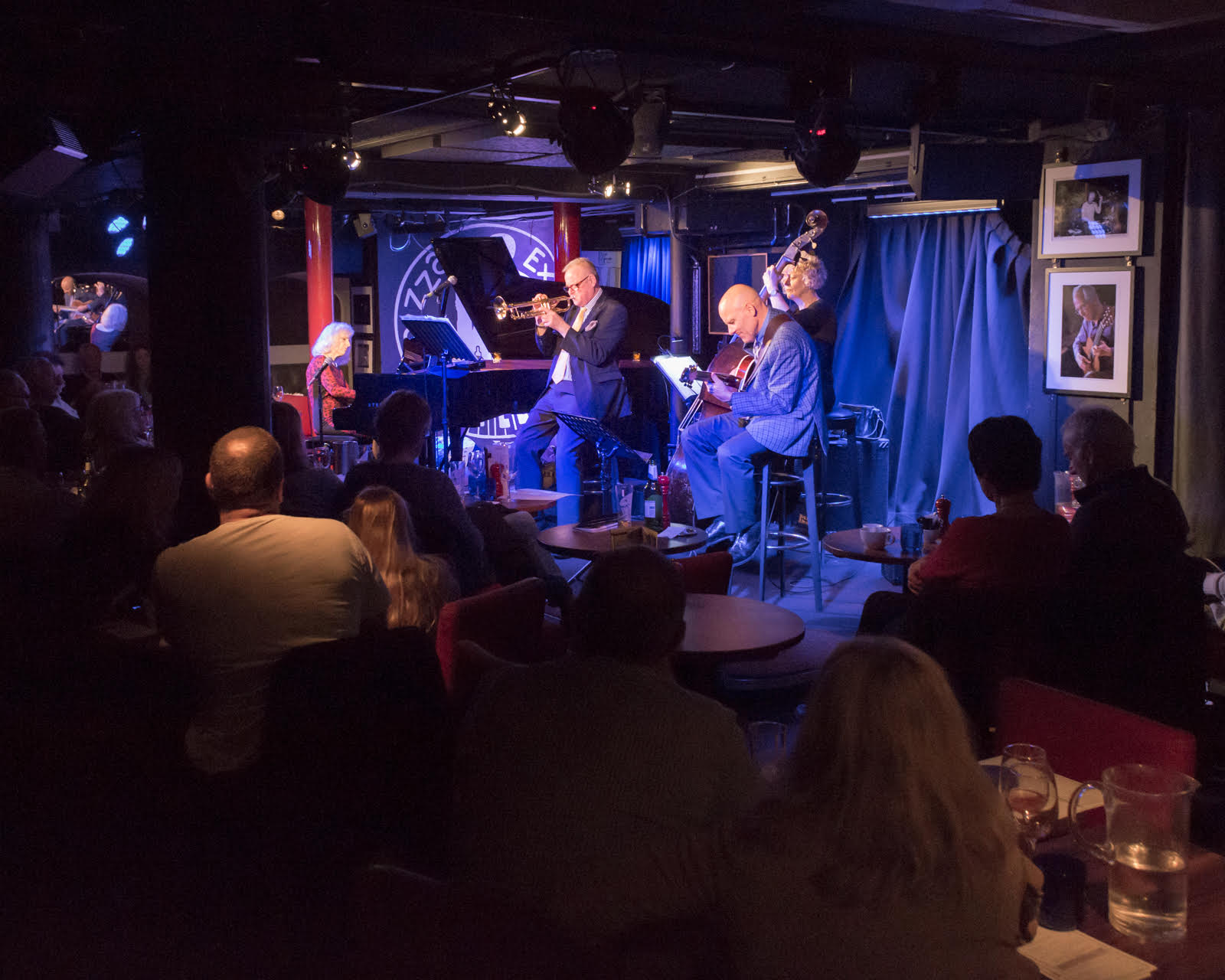 Jinjoo Yoo, jazz pianist/composer/arranger  is a dynamic performer with a unique voice. Hailing from Seoul, South Korea, Jinjoo currently resides in New York and collaborates with different projects and leads her own group as well. As a leader and a solo performer, she has toured internationally, including performances in the United States, Italy, Greece, Azerbaijan, and South Korea. In 2017, she was selected as one of the finalists for the Baku Jazz Competition.

Enjoying singing and playing instruments from her youth, Jazz captured her attention soon after starting University in South Korea. It didn’t take long for her to fall in love with Mary Lou Williams, Wynton Kelly, Teddy Wilson, Bud Powell, Sonny Clark, Art Tatum, Jimmy Rowles, Billie Holiday and  Carmen McRae. Since then, she has immersed herself in the music by listening to jazz legends’ albums, studying music harmony and theory by herself. Although she was studying Sociology and Economics in her undergraduate years, she found herself more interested in jazz rather than her major. After her graduation, she decided to focus on jazz more deeply in New York. In 2017, Jinjoo earned Master’s degree in Jazz Performance from Queens College.

Jinjoo stylistically encompasses the range from Jazz Classic and the American songbook to original compositions that  swing. Jinjoo thinks that her music should be able to describe this world, either beautiful or ugly, and the way she feels while observing it. Her original tunes bring stories and emotions of curiosity, joyfulness, tragedy, gratitude, melancholy, and pain.

Jinjoo recently released her debut album; I’m Curious (Gut String Records, 2018) as a leader, where she presented her point of view on music. This album features two of incredible jazz artists: Neal Miner, one of the most sought-after bassists in New York Jazz Scene, and the legendary drummer Jimmy Wormworth who has a long history and playing credentials with a host of historic jazz figures. With this Trio album, Jinjoo recently finished her CD release tour in Greece and Italy successfully. In New York, she held a CD Release Show at Rockwood Music Hall with the original members featured on her album, Jimmy Wormworth and Neal Miner.

“…Her music is unhackneyed, melodic, welcoming.  She spins out long graceful lines that aren’t four-bar modules copied from other pianists.  She has her own voice, or I should say, Voices.  The performances often begin with a simple melodic motif set over a clear, swinging rhythmic foundation.

It’s clear that she has steeped herself in the jazz tradition — reaching far and wide to include bebop, Jimmy Rowles, Ellington, Monk, and American popular song at its best — but she is herself. …..”

“In my opinion, Jinjoo Yoo is one of the most exciting new young pianists on the scene in New York. I love her thoughtful, graceful style” Stephanie Fittr

Wayne Wilkinson, an artist with Benedetto guitars and GHS Strings, is known for playing high-octane straight ahead jazz, innovative bebop jazz and original As a faculty member at the nationally accredited Colorado Springs Conservatory, Wayne helped establish the Jazz program. He is also an adjunct professor for Jazz Guitar at Colorado State University – Pueblo and conducts master classes and clinics.

Wayne has played at the White House, Carnegie Hall and at major jazz and music festivals with the premier Air Force Jazz Ensembles “The Airmen of Note” in Washington, D.C. and the “Falconaires” in Colorado Springs, Colorado and has played with jazz greats like Joe Williams, Ernie Watts, Michael Brecker, James Moody and Stanley Turrentine, as well as with President Bill Clinton, Bob Hope, and The Four Freshman.

“In my life I don’t think I’ve ever heard a more magnificent guitar player than Wayne.  His CD “It’s a Lark” is the greatest guitar playing I have ever heard.”  Bill Watrous. Chris Hodgkins is perhaps best known for his 29 years as Director of Jazz Services, the UK’s national support organisation for jazz. Chris is a fine trumpeter and composer in his own right, as well as being a tireless champion for British jazz. In the 1970s and 80s, The Chris Hodgkins Band made a name for itself supporting the likes of Buddy Tate, Humphrey Lyttelton, Kathy Stobart, Bud Freeman, Dick Carey, Joe Temperley, Howard McGhee, Peanuts Hucko, Benny Waters and Wild Bill Davison who described them as “a hell of a good band”. They also made a number of television and radio appearances. He retired as Director of Jazz Services in May 2014. With his days of administration behind him, Chris now takes to the road, the radio and the recording studio to focus on playing the music he loves. His album Boswells’ London Journal co-composed with Eddie Harvey received  the Evening Standard, Jazz CD of the Week . Chris was awarded the Services to Jazz Award at the Parliamentary Jazz Awards in March 2015.  Chris presents two weekly programmes, Jazz Then and Now  on Jazz London Radio and Jazz Is…. on Pure Jazz Radio in New York.

Chris has just published three new manuals and revised three manuals on the On line Music Business Resource. The three new publications are; Where do you want to be – a business planning manual for jazz music students and musicians, the Guide To Music Organisations – Including Copyright, Royalties and IRCSs; and  A Quick Guide to Contracts for Jazz Musicians. The three manuals that have been revised are; Guide To Marketing Your Band; Funding Tips; and the Guide To Getting Your Music On The Radio. All six manuals are available as free downloads
from:  http://www.chrishodgkins.co.uk/business-education/

“For many years better known as the man in charge of Jazz Services, Chris Hodgkins’ credentials as a melodic mainstream trumpeter have been increasingly evident since his retirement from that post.”  The Jazz Rag, Spring 2018

“Trumpeter Hodgkins …… working with the Americans Lenore and Wilkinson. Falling into the chamber jazz category and perpetuating the trumpeter’s preference for intimate groupings…….. with Hodgkins punching home the melodies in his Eldridge-to-Shavers mainstream style as Lenore and Wilkinson accompany and then take their turns to solo……… Hodgkins has both commendable facility and a vivid imagination.” Peter Vacher, Jazzwise December/January 2018. Bass player and composer Alison Rayner (www.alisonrayner.com) has been playing jazz and other contemporary music since the mid-70s. She spent five years in the 80s with critically acclaimed jazz/Latin group The Guest Stars, touring all major international jazz venues and festivals and recording three albums. She currently leads ARQ, her contemporary jazz quintet, described as ‘a beautifully integrated band’ **** by Dave Gelly in the Observer; ARQ have built a substantial and wide-ranging audience over the past three years of touring. Their recent second album ‘A Magic Life’ has had national and international radio play, with outstanding reviews in the jazz and national press:

“Beneath it all Rayner is dark and sonorous, like a Haden or Weber, able to make a rounded single note underwrite the band’s soarings…” Andy Robson, Jazzwise

“Playing bass with a big, beautiful bass sound that comes from the heart…”
Val Wilmer, author, As Serious as Your Life: The Story of the New Jazz

On Saturday 18th May at Hay on Wye  the event is supported by Noson Allan/Night Out and  Chris Hodgkins, Jinjoo Yoo,Wayne Wilkinson and Alison Rayner are joined by: He has broadcast frequently on BBC Radio 3, talking about and demonstrating the music of Jelly Roll Morton, Fats Waller, Earl Hines and Teddy Wilson.

He has a Wikipedia page and an entry in several jazz reference books including the Who’s Who of British Jazz. Janice Day studied music at Birmingham University and after a successful career as a Repertory Singer (singing the repertoire of the Dance Bands of the 1920s and 30s) developed a 1930s musical character comedy act and a one-woman show.

She is a commissioned screenwriter, author and award-winning stand-up comedian.

Original lead singer of both the Piccadilly Dance Orchestra and Keith Nichols’ Cotton Club Orchestra she has performed at the Queen Elizabeth Hall, the Royal Festival Hall, the Purcell Room, the Wigmore Hall for Radio Three, Proms in the Park, Cadogan Hall; and at jazz clubs and festivals in Europe and South East Asia.