There are a couple of videos of the Chris Hodgkins Band in Cardiff when they did a series for HTV. In the band are Chris Hodgkins (cornet), Bob Tunnicliffe (trombone) Eric Gilchrist (alto) Dave Greensmith (bass), Jed Williams (drums) and Eric Herbert (piano)

Church of Christ the Saviour. Jazz on the Broadway. Ealing, 18th May 2013 Chris Hodgkins with the Acton Collective

“The annual Rent Ceremony is a weird and wonderful occasion when the Chairman and Trustees march around the Piazza, accompanied by the Town Crier and a jazz band, to pay the “peppercorn rents” of five red apples and five posies of flowers for the buildings, known as The Protected Lands, on which the Trust owns a 150-year headlease.”

The Covent Garden Jazz Marching Band took part in the Rent Ceremony for 20 years. A “somewhat unique one off group”, the band started out with just six musicians and in its  last year boasted fifteen.

Peter Butler of Jazz & Jazz  has documented the Annual Rent Ceremony and the  Covent Garden Jazz Marching Band for a number of years and you can see his archive with video clips here: A weird and wonderful occasion in Covent Garden

The concept of the show is as Chris puts it “what it says on the tin”. Chris will be delving into the history of the music and present what is happening on the scene today with a watchful eye on British contemporary jazz. The show will run every Monday at 3pm and 8pm repeated on Wednesdays; and will complement Todd’s Turntable by Todd Gordon which runs on Sundays at 12pm repeated Wednesday evenings.

Each week the play list will be posted detailing the tunes played, the musician or band, album and composers. The playlist can be found at: Jazz Then And Now

Richard Michael jazz education pioneer is joining Jazz Then And Now on the last week of each month for a 15 minute programme “Its All About Music”. Each programme will cover a facet of jazz – the first in the series is Richard on the “walking bass”. This will be followed buy; Walking Bass
Latin Feel, Swing Groove, Gospel, Boogie Woogie, Scat, Modal, Freeform, Fusion, Ragtime, Stride.

Jazz Then And Now – “It must be one of the most eclectic jazz radio shows out there.” Bill Trythall at Beaconville Music PR

Chris interviewed Clark Tracey on the publication of his book The Godfather of British Jazz – The Life and Music of Stan Tracey and also Clark’s career in jazz and what the future holds. Clark’s book is published by Equinox, www.equinoxpub.com

Pure  Jazz Radio, started on the 1st January 2009 with a few dozen listeners, emerged as the “Internet Jazz Radio Station of Record”. We not only play great jazz but are the home of some of best jazz presenters in the world. Pure Jazz Radio also promotes the jazz scene world wide and talks with some of the leading talent regarding their latest projects. If it is happening – and its – jazz – you’ll hear it here at Pure Jazz Radio. Rich Keith, General Manager, Pure Jazz Radio – New York

Jazz is a broad church that has developed an  incredibly diverse range of musics with a global reach. When there is an altercation in the choir stalls about what jazz is, some one is reinventing jazz and building an extension to the church. The programme Jazz Is  illustrates the rich history of jazz and the vibrant happening jazz of today.

Each week the play list will be posted detailing the tunes played, the musician or band, album and composers. The playlist can be found at: Jazz Is…. 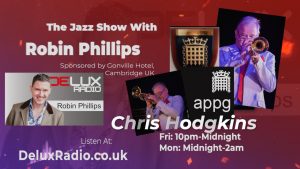 Chris’ blog Complaints In Wonderland  contains a wealth of material dealing with politics, the vexatious question of adequate arts funding for jazz, economics, and like a digital Henry Root, complaints to companies.

Below are press kits for Chris

Chris Hodgkins And His Band

Chris Hodgkins And His Band photo