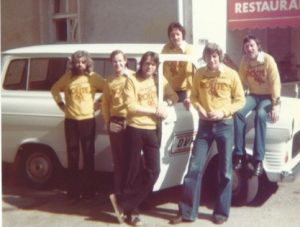 Residents of Widcombe have told the Chronicle with great sadness that Widcombe resident Brian “Joe” Spibey, known as Jazz Joe passed away shortly before Christmas aged 79.

His death comes only eighteen months after the passing of his collaborator, singer James Lambeth who died in May 2020.

“Joe was a Widcombe fixture,” said his friend and Bath Chronicle columnist Ralph Oswick. “He’s given us a lot of entertainment in the past. He’ll be sorely missed by everybody.”

Joe, who lived in Gordon Road for over 20 years was well known for the huge contribution he made to the local music scene in Widcombe and further afield.

He was a talented double bass player and regularly played at the White Hart, the Ring o Bells, the social club and at many events like the Widcombe Street parties and Widcombe Risings.

He organised the music for the Ring o Bells Sunday Jazz evenings for many years bringing a great variety of talent and musical genres to Widcombe.

Joe began his career in music studying at the Ealing Art School in the 1960s. His contemporaries in Ealing included Ronnie Wood, Keith Richards and Pete Townsend.

“Joe” was his brother’s name which he picked up at school when they were called “Big Joe and Little Joe”. The name stuck with him all his life.

“It was back in 1973 when I first met Joe,” said friend and saxophonist Eric Gilchrist, “I had a jazz quartet that played in a grotty pub in Charing Cross in London.

“Joe replaced the bass player who was returning to Australia. After a few months I started doing a lot of work in Europe so Joe took over running the band.”

He started out playing trumpet then switched to the bass guitar, playing soul and rhythm and blues music before settling on the double bass and the music he has loved playing for nearly 50 years – Jazz, especially Dixie Land Swing.

He became a professional musician, playing trumpet in the soul & blues band ‘Fulsom Stilwell’ in venues across London and touring Switzerland, The Netherlands, Germany and Austria.

“Joe and I became good friends over the years and became flat-mates for a while,” remembered Eric Gilchrist. “We even went on holiday together to New York to go to the various famous jazz clubs we’d both heard about. Some years later we also spent two weeks in New Orleans.”

He soon formed his first jazz band, String Jam in the 1970’s going on a nationwide tour with folk singer Ralph McTell, writer of “Streets of London”. This was not always glamorous and they didn’t always play to full houses.

He recounted a time when his jazz band was the house band at a well-known Chinese restaurant. This was good regular work for a musician playing 6-7 nights a week.

Unfortunately they had to play whenever there were guests and carry on playing until everyone had left, even if the only diners were a romantic couple sitting in the corner.

Perhaps less known is that Joe was a passionate movie buff, especially appreciating Hollywood classics featuring Jazz music. For many years he dealt in all sorts of movie memorabilia amassing a large collection before downsizing when he moved to Widcombe.

For many years he edited the “Jazz on Film” website, a treasure trove of information on all things jazz and film. He is recognised as a leading Jazz archivist and is called to speak regularly.

For several years, Joe was Chair of the Bath Film Society, where he was always known as “Brian”. “I just assumed the Joe sounded more jazzy than Brian and it was his stage name,” said American film buff Sean Connolly. “Every time we bumped into each other in Waitrose or in Milsom street, the time would fly past whilst we chatted about our favourite movies.”

“At the time of the Buena Vista Social Club, we collaborated on a book about Fidel Castro,” said Sean. “Brian was really knowledgeable about everything like that.”

Joe wanted to move out of London but be near enough to get back easily for work. He settled in Bath halfway between London and his wife Sue’s parents in Devon.

He has been in Widcombe ever since and was established in the Bath Jazz scene. He played with several bands and his own Joe’s Jazz Jumpers.

For nine years he organised the regular Jazz at the Ring’o’Bells, drawing on lots of local talent, but he also regularly invited saxophonist Eric Gilchrist and guitarist Max Brittain with whom he had toured Europe to play in Bath.

Joe played at many parties and events under the banner of Swing Street West and according to Widcombe Rising co-organiser Ralph Oswick, he played at every rising too.

During lockdowns in 2020 and 2021 there was limited opportunity for bands to play live, so Joe, Eric, Max Brittain, and Richard Simmons got together online and recorded some jazz standards remotely which Eric mixed at his studio in London.

The recordings came out really well but that turned out to be his last major musical project. One where his long-term jazz musician friends were able to play together again. Joe had been preparing copies to send to friends and family when he passed away.

Brian Joe Spibey is survived by his wife Sue and his brother Joseph who lives in Sweden. He was 79.